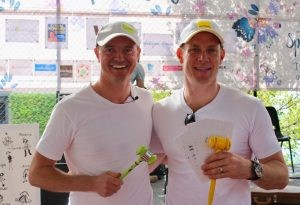 I nearly dressed my 5 year old in her school uniform and took her with me to my first auction last Saturday. The reason being that it was only a few months ago I’d stood in front of her teachers and class mates and sold a free commission and auction at their school fete. It raised a whopping $89,500 and Saturday was the day we auctioned off the winners property.

There had been a lot of talk throughout the community about the cost of a property that would justify a purchase of that magnitude.

Well all was revealed when the clock struck 10am at 34 Satinwood Court Bardon. five registered bidders spread out across a sprawling contemporary estate, overlooking the infinity edge swimming pool with the Brisbane city skyline perfectly framed in the back ground. The buyers eyed each other off, with their bidding cards at the ready and started firing off their first bids.

“$2.8 million,” was the first call. It was all starting to make sense.

Matt Lancashire, my partner across the business, was the agent who had donated his services for the sale. He moved with precision between the buyers, just as he had done at the fete when we sold the prize originally.

The bids flew back and forth in $100k rises until it paused at $3.9 million. Matt and I managed a swift negotiation between the buyer and seller before announcing the property ‘on the market’ at an increased bid of $4,275,000.

As the dust settled on the sale and both parties hugged their supporters, Matt and I reflected on an amazing chapter.

A sale of $4M+ with five registered bidders, as many people are questioning the strength of the market, showed there is still plenty of gusto in the Brisbane market. It gave insight that a well marketed property is a key ingredient to a successful auction. Finally, we also shared a nice moment with the owners that their generous bid at the school fete had been the right decision and had actually turned out to be a very smart commercial decision!